In opening, I'd like to apologize for the lack of updates the past couple of weeks but fret not! That just means there's more to to read now!

THE UNREALITY OF TIME: Fans looking forward to the first ever physical CD release, the four-way split between Psychomanteum, Rasalhague, Cogwheel and Taphephobia will be glad to know both Exxospheric Emissions and I have received our copies from the factory. They'll be available shortly!

REVIEWS: Over the past two weeks or so, I've been fortunate to hear of a collective of Kalpamantra-related reviews. They are particularly simplistic, but positive feedback is always appreciated nonetheless!
You can view the reviews here.

FIGURES: I'm also happy to announce that the Kalpamantra SoundCloud page recently struck 1,000 followers and the fan-page on Facebook has just passed the ever popular #666. Thanks for the support!

RELEASES (PAST): Just to get you up to speed (although you probably already know), there have been new releases posted on BandCamp. They are KM047, KM048, KM049 and KM050.

RELEASES (FUTURE): Be sure to stay tuned for the upcoming Kalpamantra/Malignant digital compilation, not to mention upcoming material by Gydja, Parhelion and New Risen Throne.
Posted by Sw. at 09:10

The Unreality Of Time

In August 2011, the conceived plan for a 4-way split album between Rasalhague, Psychomanteum, Taphephobia  and Cogwheel  was initially meant for a CDr release between Kalpamantra and a friend's label.

At the time, problems arose that meant an EP version was posted online as a means to keep the aura generating while we waited it out.
During last month plans went ahead, and the split CDr was confirmed by Kalpamantra and Exxospheric Emissions.

It's now my distinct pleasure to announce that the CDr's have returned from the factory, and is now readily available from Exxospheric Emissions.

I've not yet received my half of the release, but within the next week or so, I shall!

Some links of potential interest: 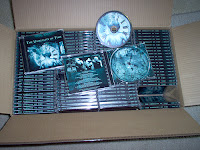 Well, that's another well-stocked compilation put out there in the music world.

I must say, neither Saur Maas  nor Krtrima Sprha  were targeted at being as full as they turned out to be (okay, SM might  have been) but the sheer volume of musicians who wanted to be a part of the latest chapter was too large to deny. I know, there are a small handful of people [that have made their opinions known] who don't think compilations should be as stocked as mine are, but 99% of my listeners want that, and since  I compile these specifically for you/them, saying no isn't really a choice.

Nonetheless, I can usually measure success from word of mouth, or how quickly my credits on BandCamp are used.
Saur Maas  lasted two days before the credits were consumed, the latest was 'sold out' within 20 hours.

Unfortunately, I don't get money every day, so maintaining my BandCamp is something that takes time, but I've taken the liberty of spending hours in front of my computer screen uploading the album on Last.fm in the case [of time] that it'd wind up this way... again.
[Visit www.last.fm/label/Kalpamantra]

Still... I didn't think I'd ever receive the reception I did for SM, yet I did.
What's more, the new compilation has received even bigger notice, in even shorter time.

I'm grateful to every single individual, band, promoter and writer that took the time to write to me with their approvals and appraisals.
I'm also glad so many of you took the time to read the relevant files I attached.

You'll be happy to know, there's more where that came from.
The Malignant-based comp is due in late June, and I just MIGHT have some other future plans...

But anyway, I just wanted to extend my gratitude to everyone who's supported my work since I first started...

The seventh installment of the colossal Kalpamantra compilations has been posted today.
You can download it freely from the direct source at BandCamp

Or, if you wish to download the tracks individually, want to save memory, or the BandCamp site is down, you can visit Kalpamantra at Last.fm

By request of the band (through Jason of Malignant), I'm happy to announce that I've brought Italian two-man project Hall of Mirrors  to Facebook. The duo first came to light in the dark ambient world with their respective solo-projects Amon  and Nimh, and have recently signed to Malignant Records to release their 2CD third album, Altered Nights . I've not yet heard it myself, as I'm still waiting for it to arrive, but since it's got collaborations with New Risen Throne,  Vestigial  and Subinterior,  I expect to have my mind proverbially blown.

If you're an old/present/future fan, join me [us] at Hall Of Mirrors' Facebook Page
Posted by Sw. at 17:46